or if you prefer

Death is just one phone call away.

or if you prefer 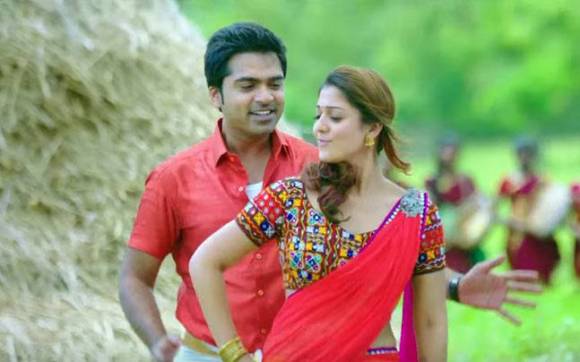 OK, I mean who cares, like as if you are going to know the difference between two kinds of film writing? Yes, we are talking to you reader.

At least take a moment and thank us for convening at this unGodly hour and writing about Simbu’s latest film, if this could be called a film(i.e).

Although we do have to write something, don’t we? Let us pause a bit and talk about..hmm..say how ideas are born.

Idea Man 1: Hey, wont it be a great idea if we made a film with Simbu and Nayan, you know rekindle some long lost shared excitement that we all had while slyly deciphering Kumudam kisu-kisu(gossip) about their past life!*

EDUCATIVE INTERMISSION: for quite sometime the Simbu-Nayantara thingy was the Brad Pitt-Angelina Jolie types of Kollywood, so like say Siyanthara or Nimbu.

Idea Man 2: Wow, what an idea; let them play lovers who discuss their own love life, you know…I mean…they have had at least from media reports… a long list of lovers!

Whoever else who was in that room: YAAYYYYY!!!!!!!

Idea Man 3: Let’s get them to play IT people, so that we can insert generic social commentary, because this will be useful as we have nothing to shoot on screen whatsoever.

Whoever else who was in that room: YAAYYYYY!!!!!!!

-100: movie thinks IT guys and gals are sick nobodies who have lost all reasons to live, they are vacant bodies in branded shirts whose sole existence is to make telecom companies and credit card companies survive, they are also the target audience for this movie, hence director should be penalised for making excessive jibes at the industry which is basically going to pay him.

<also if anyone even has an idea about making fun of farming or farmers, you will be instantly burned>

Shows the absolute hypocrisy,We are all OK for some good fun on the expense of the IT industry, but yeah they get paid a lot and go to fancy restaurants and all buddies, but so do actors and actresses. Also there should be some background about the industry.

You are after all going to rob their money and do whatever you wanna do, this is so akin to the farmer/peasant/poor appeasement that dominates politics and hence culture as well. It also casts dark shadows on cities and those who inhabit them while easy deification of those who live in villages take place.

Movie also suggests that girls from villages do not look good in make up.

Let’s get back to the idea men.

Idea Men 4: Let’s make this an out and out comedy, let’s cast Soori in the role of the sidekick; let’s make him the hero’s friend.

Idea man 1: No no, friend has been done in so many films, let’s make him a driver, the hero’s driver!

Idea Man 2: A driver of the hero’s two wheeler

Everyone in the room: ROFLMAOs

-568K: This movie is the equivalent of absolute nothingness.

Maybe this was inspired by the teachings of Osho who is referenced in the film and we are mere writers of the FRS are not readers of spiritual teachings and hence cannot make sense about why there is so much nothingness in this movie.

There is so much nothingness in this movie that even FRS seems like a well written blog by thoughtful-aesthete-soft-spoken-gentlemen-who-listen-to-opera types.

The format of the movie is as follows.

Simbu calls Nayanthara (on the phone)….misses

Nayan calls Simbu (on the phone)…..misses

This happens close to two hundred times, sometimes there is Andrea also calling; sometimes their calls connect and they speak about how the number of missed calls have increased, seems highly philosophical to us. <revert to Osho>

-45: nayantha sings one Ilayaraaja song in the car, thankfully this only lasts a second but still we are mean people, we are not thoughtful-aesthete-soft-spoken-gentlemen-who-listen-to-opera types.

-890: Drone Photography: hey, DOP buddie! I get it you are excited about this new drone thing, you know slowly drawing up and down about cities, but Chennai and Thiruvayyaru are not like Gotham city or something, even if it is what are you establishing anyways?

Look mummy! so many drone shots!

Something, something happens and then there is a fight etc, and again this leads to some 300 phone calls, still no telecom company came forward to co-produce this movie.

Your open wikipedia tab on Director Pandiraj would remind you that he is a national award winner. As IT employees ( not proud and all, but yeah we have to make a living), we have been asked to make graphs and the one for Pandiraj would be one that shoots down nastily cutting the x-axis and shows no signs of stopping.

‘jolly’, ‘breezy’ are the words that is often associated with these kind off films and in some dirty mind these are accepted as entertainments as well.

Who are we to question such a thing, after all the only major wish of the heroine is to be the one lady who will always fit the tie of the hero.

Enough we are not going to write more about this film, a thousand words is too much, if you do not know what FRS is, please do check our previous blog posts.

An edited version of this post cannot be seen in any newspaper, because the original itself was not edited.