Normally this tranche of the blog covers crime, mystery, thrillers and other exciting books. But these are not normal times.

Normally, I would detail the pleasures of discovering a novel, it would be from a stray reference on the few passionate blogs that cover books in my area of preference or it would be from those well read people I stalk on goodreads. But these are abnormal times and I somehow got sucked into reading an acclaimed novel, not that it has not happened before, but never did I believe in the acclaim simply without question and completely. I would also like to point out that picking this book also stems from a small voice in my brain which keeps going on about how I should widen my reading choices which would hopefully expand my mind. I usually sneer at this part of the brain, make fun of it so much that it is ashamed to make its presence felt, but there are times when I am beyond myself and give in to such thoughts,and these are not normal times.

Normally, I would take time reading novels, since they are of the crime, mystery and thriller genre where the structure and mechanics are as important or even more important than the turn of phrase or “feelings”, I would read a little and spend some time thinking about the author’s choices and setting, almost trying to retrace a blueprint. I know, it is the only true intellectual activity I engage in, I see if there are tricks that the author is playing or is he against a deadline to deliver yet another novel, it is because I am trained to look at structures that Sally Rooney’s work seems like a heap of fallen bricks.I finished it in a week.

I realize this is my inability to appreciate the novel. It is plainly unfair to criticise a novel for what it is not, but I am really trying to record my experience and provide some context to my reading mind.

Normal People follows the of the ON-AGAIN OFF-AGAIN relationship of Marianne and Connell from high school, she is the smarter and unpopular one and he is the smart and popular guy, there is some class difference in the background, his mother works as helper in her house, only for them to make some disparaging comments on how capitalism is the cause for all the ills of the world. Sigh.

Maybe they will join a revolution, I imagine,and bring in conscious capitalism or maybe they will reinvent marxism for the millennials. Sorry but nothing of that sort happens, the characters are not so much in control of their lives to take control of word narratives. Maybe if Connell could have gone to study law and not followed Marianne to Trinity college, he would have had a shot at changing world narratives.

Hey wait, maybe the novel is not interested in that, the world events are a background just like how social status is a background, not as much as an obstacle, chill, nothing really happens in this book. Ultimately the biggest reveal comes in the form of a fine arts course in New york, those are the stakes in Normal People.

Page after page, I flip in the hope that maybe there is some light at the end of the tunnel, light which informs these characters that most of what happens to them is a result of what they want to do and not the happenings of whole wide world, maybe I thought even Marx would make a guest appearance and tell the characters to get a life, but all I got was feelings.

This book even got long listed for the Booker Prize. Wait, that’s not a comment on the literary novel or the Booker Prize itself, it is just an inference that the “feelings” novel is not for me. I am not evolved for it. Or maybe it was just a bad pick, I am not really shutting out that small voice in my head, because an analytical mind is always open to possibilities.

I know there is a book out there that meets the stories glories of such fiction and helps me expand my mind, but Normal People isn’t that. 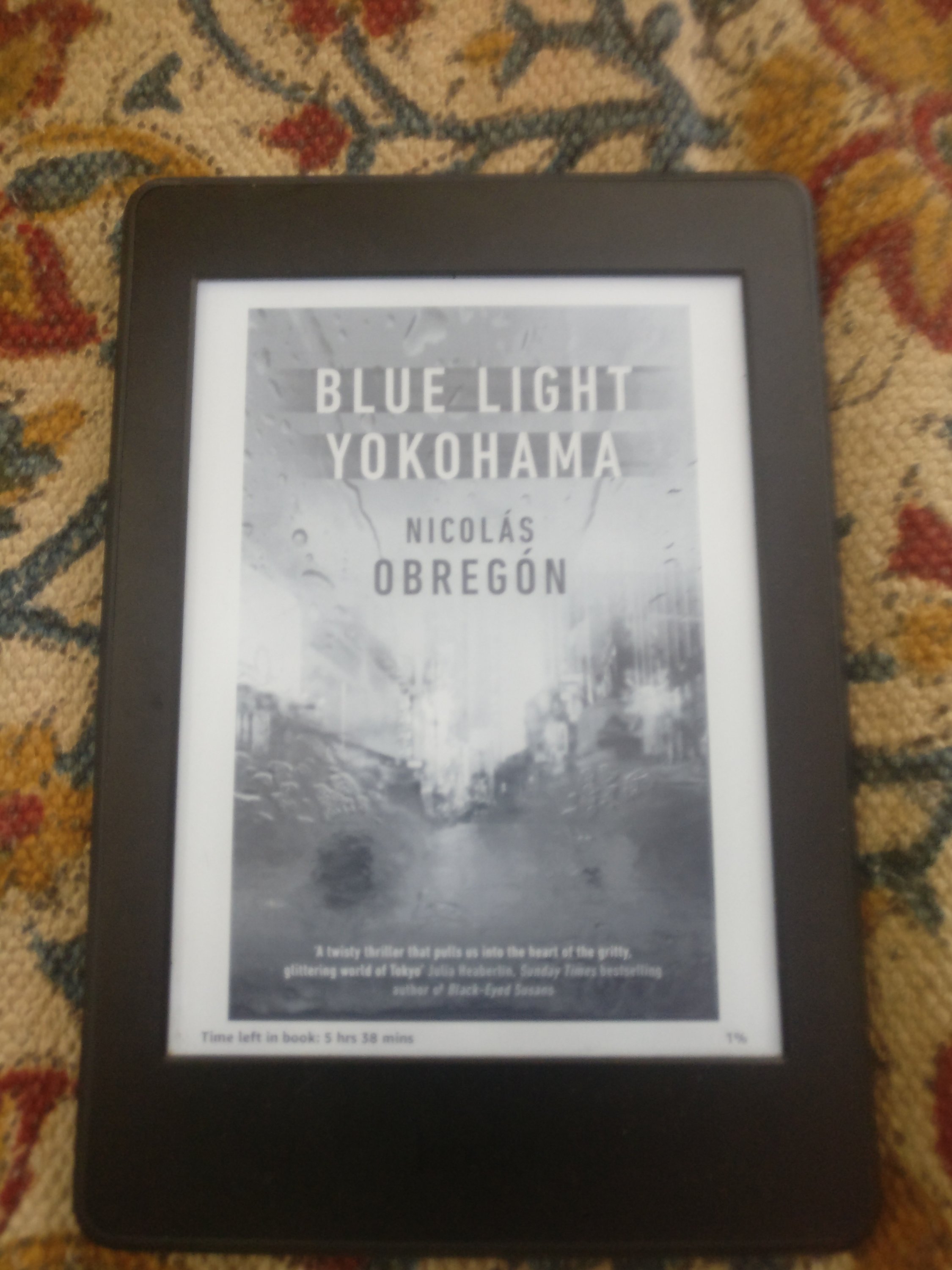 It’s always a good feeling to keep notes and forget about them for a while.

Only after reading Nicolas Obregon’s Blue Light Yokohama, which I thought I had discovered after weeks of lurking on crime fiction blogs, only to be amazed to find an earlier to-read list with the same title.
In that way, what I am seeking is something I already have?
“Tokyo is a million cities. You ever wonder if some of those cities are good and some are bad?”
I love cities, it is something we need to be proud of; somewhere that encourages and allows everyone to be together yet different.
Blue Light Yokohama is a moody Tokyo city novel central to which is a provincial-obsessive detective Iwata.

I know there are a lot of self-absorbed detectives in crime fiction; maybe this is a recency effect but I have not read anyone as angry as Kosuke Iwata and the pages bleed with his pain and to know that the second Iwata novel has already released puts an expectant smile on my face.
The praiseworthy prose demands multiple note taking. Sample : ” He is happiest, be he king or peasant, who finds peace in his home”
Detectives are seekers and a detective novel has more scope to explore philosophy through ruminations that pop-up in the detective’s head and Obregon does this at points that elevate the novel much above a ‘follow-the-threads’ serial killer story, which begins with an unspeakable killing of an entire family.
Dreams & reality intercut in ways that made me feel Iwata’s fever.

Yes, this is that kind of a novel where slipping into the detective is the best option.

Along the way, Iwata is given advice, thrown out of service, double crossed and of course bashed to near death; as I said best way to get this heightened experience is to be Iwata for the length of the novel.

The fact that this is Nicolas Obregon’s first novel itself gives me sleepless nights. A twisted-cracker of a novel, the one that ended a short phase of my reading drought and possibly one of the best I’ve read this year.
Oh yes and people speak to Iwata like ‘ I think you are the type of person who will disappoint yourself before you let life disappoint you’
Very relateable.
Over to the next one.

Some critic has quipped on one of the Beck novels as follows  “pick up the books, block out a week, lie to your boss, stay in bed and finish the series”.

Normally critic-quips are for the show, but this time I tend to agree.

The Martin Beck novels are the written record of “this is what police work looks like” or as we say in this part of the world “Idhu Dan Da Police”.

A far- cry from the constructed problems that has come to dominate the crime novels or the detective story. Inspector Beck from Stokholm Homicide is no Hercule Poirot, but very much a working man(a character in the novel calls police-work a curse); who is met with walls of problems with every turn.

Sample this from the words of the inspector himself about this case:” Unpleasant. Very unpleasant. Singularly unpleasant. Damned unpleasant. Blasted unpleasant. Almost painfully so.” The disappearance of a person is not a problem for a gentleman detective to solve but a genuine human tragedy.

In their second outing, authors Sjowall and Wahloo send Martin Beck to Budapest to trace a Swedish journalist Alf Matsson who has literally disappeared into thin air. It is said that this writing couple alternate chapters and sometime even paragraphs between themselves, but I was unable to tell the difference.

Shady characters populate Budapest as Beck tries to make sense of what is happening to this case, while he should be vacationing with family on an isolated island and he knows only one thing, that this case cannot be solved alone. Yes, this is a summer holiday book and somehow I took it up at the right moment.

Even at 200 odd pages, the authors are able to convey a world of detail and observation only proves that words, like bullets, only work when used judiciously.

Oh, just realized that the title of this book is a wicked pun. So good these Swedes!

Do check out their Edgar Award winning novel “The Laughing Policeman”

Top of the heap is an occasional column on books