Or the birth of a genre called Shankar 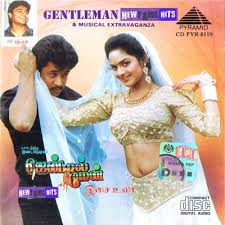 Two nights ago they showed Gentleman on TV, yes I watched it like I have always found time whenever the movie was shown; which is almost always. The movie somehow takes me back to a theatre called Udhayam, it is still there, with not even a shadow of its previous glory. It stands unattended, sign boards sagging opposite the colossus of a metro station up and coming, surely to devour the memories of Udhayam being the most favored film destination of people in and around where I live.

Gentleman was not the first film, I saw in the theatres; but is definitely the one I remember the most; that along with Jurassic Park. The umbilical cords that brought me to my love: film. There is this uncontrollable Hyde of emotions in me, whenever I watch a film; there is more of it when I watch something the second time; the uncontrollable burst of words that comes even while those pictures flicker through. Whatever the film might be, I try to write; but even these bursts would have been rubbished; called as an amateur narcissist attempt to be part of something which you can never be, these feelings are however washed away in the following morning and one more count increases in the unfinished word documents folder somewhere in this system. But Gentleman is different; I will risk any internal battle to write about a film that one has seen at different points in life; thus ends the self scribbling. Oh yes, I did really hate my previous post. #selfhate

A thing of honesty is a joy forever.

It is the year 1993, without having to attribute what world events would have influenced the making of a movie; I proceed directly to corruption; Gentleman was definitely not the first film to show  the color of the hands of the politicos and officials were; at least in the films I have seen before, there have been villains who are politicians and they are villains because they rape and plunder, how they don’t keep up promises or completely ignore the people or they have some direct confrontation with the hero. But never has the problems of the working middle class, of how they have to deal with things grudgingly done. It was a terminal shift from the problems of the poor to the problems of the people who neither belonged below nor above.

The characteristic would repeat straight from Shankar’s next film Kadhalan a middle class collegian yearns for the governor’s daughter; in Indian it was the same suffocating middle class that brought Kamal’s Chandru to the city, Mudhalvan’s Pugazhendi a TV reporter who lives in a street as narrow as an old woman’s hair center parting; even  few of the parents are the same in Boys; the exceptions only being Sivaji and Jeans: but those are different films, it is clear from above that these problems are central to the films of Shankar, but Gentleman being the first is the most striking and honest; a mould from which the others were made.

One man vs. the world.

Staying on the topic of classes, Arjun’s Kicha coming from a poor background and in a society which prevents him from becoming a doctor, so then he uses a self supporting industry; one of entrepreneurial spirit and one in keeping with a certain community’s stereotypes to give him a morning alibi; he doesn’t at once wield a revenge sword at his enemies, he waits and does nothing to them.

Instead he becomes a professional thief by night, only to give unto others what was denied to him: education, this according to me is the closest we have gotten to Batman, and there are many similarities as well; Kicha also has his own Alfred.

Also the protagonist would choose the supposedly meekest of communities to make his living, to avoid any kind of suspicion. The Brahmins are known to have distanced themselves from active society, fearing any direct contact with it; it is often perceived as indifference, it is only another representation of fear in an increasingly Dravidian political land. Shankar would develop this one man theory in the rest of his filmography to increasingly dizzying implausible heights, finally in Sivaji the character becomes a sort of Atlas on whom the world rests. It would have lost the angst and the humanism as how Arjun played it in Gentleman.

The film itself was a resonating success; no first film Tamil director had yet broken into film heaven as how Shankar did; he had in short he created his own genre and it was only later that he got to work with Kamal and Rajinikanth; so his initial success can surely be attributed to the taut storyline.

It is however far from perfect, in real life nothing close to the events of Gentleman can happen, but somehow the film shortly stops our rationality but not entirely dismantling it; that kind of balance would be very tough to maintain, even for Shankar in later days.

The setting itself provides ample opportunities for humor and gross indecency with games like Dikkilona & Jalabulajung the very mention of these names expound nothing but sex, there are also close-ups to body parts which are better not shown when children are watching and a mock rape, but these too are inducted into the scheme of things (if you are one looking for explanations to quench your logical questions, these are there; but just). The film also moralizes the current generation, but not from the angle of a frustrated policeman  shooing off scantily clad girls but in an almost ‘if you do this, this only will happen’ approach.

Like most Tamil movies which couldn’t find solutions for problems it deals with, Gentleman too ends up in court, the end is no good for society but there is some hope for the individual, the do-gooder will survive.

Gentleman created a format for big budget filmmakers to fill it wither juice(or lack of) later on, so many sapling films with the same story or with a different problem cropped up covering the issues it sort to tackle, but essentially the same thing, it gave birth to the mass film with a different meaning, not like the ones made by S P Muthuraman and others in the 80s; but not completely different. It was the perfect launch pad to the starry skies and milk bath cutouts, but not all succeeded as Shankar did. It can be easily said that he is one filmmaker who uses the screen to the fullest, but succumbing under his own persona he can possibly never make a great film, all his movies will be hits, but it can never come to the closeness of being a great film is what strikes me, not even close as how close Gentleman came. His ability to draw in masses and manipulate audience to believe in a dharmic utopia for three hours is still there for people to see, but how long will he be at it? Will he fail when he or his audiences finally wake up to the truth that one man really cannot change everything for others?

The burning body of Manorama wailing running hither thither in her hut providing her son the one last shot at donning the lab coat and listening to the stethoscope, and Vineet or what is left of him is surrounded by fluttering bloody appalam are pictures that would remain with me.

Shankar continues to make big budget films, his most recent film and perhaps his weakest was the Tamil remake of 3 Idiots, one of the biggest successes of the year. Although he himself has become his archetypical hero, producing films like Veyyil, Kalloori and Eeram. Small films which aim to just to tell a story, something he could never do; something he was probably denied off. Just like the medical aspirant Kicha who steals secretly to build a ten storey hospital

The Right of Children to Free and Compulsory Education Act which guarantees education for children between the ages 6 to 14 came into force on April the first, 2010. The problems of higher education discussed in the film are yet to be dealt with.