There is an anecdote of how Queen Elizabeth went up a tree as a girl and came down a Queen, to put the story of Baahubali in a single line will be on similar lines, like say, the boy who went up the waterfalls and became a prince.

But stories are best told in their entirety with flourish and detail and the stories of kings and queen require something else, magnificence.

Magnificent as they may be in text, the trouble lies in the realisation of these visuals from the mind and this is where we come to the ‘is technology taking over our movies’ part of the discussion, in a film like Baahubali yes, a computer really does aid your/the director’s imagination.

From a country that routinely decries its films for not making movies with better graphics, we are very much left behind in the technology debate as well, especially in a time when StoryBrain came up with what he calls the Weta Effect last month; which is in other words that movies with better graphics do not really resonate well with the audiences.

Personally, the inability to make graphics seem seamless in only a temporary worry and can be overcome with training and investment and Baahubali is definitely a step in the right direction, the best graphics film is a film that you can sit and not worry about the graphics (remember Kochadaiiyan), also miraculous that we have moved so far away from Kochadaiiyan in a span of two years. And that is all I have to say about Baahubali’s graphics which went from non-troubling to quite spectacular, but let us first attack the mind/heart(don’t know which does which job, not a doc) of Raajamouli which I guess is filled with fascinations for the epics and long forgotten stories from Chandamama back issues.

Fifty and a half years back, we were making such movies, often large studio productions involving the matinee idols from the states below the Vindhyas, swashbuckling stories of slaves who become kings, banished princes, scheming uncles and whispering corridors, occult magicians, tender princesses and giggling harem girls and not to forget the scenes of war.

With the advent of the so-called realism and the Dravidian movement, these movies dwindled, but the spirit of the classic fantasy lived on but not quite so rightly on the shoulders of mega stars, the characterisations would only fit a mythical time: the masala film.

Somehow a hero jumping between cliffs sits well within a royal story rather than a modern entertainer. Rajamouli’s Baahubali is set in the mythical nation of Mahismathi covering diverse geographies (waterfalls, mountain avalanches, vast dry lands and imposing palaces) and populations ( tribes of different types, assassins, barbarians and royals of course) deserves mention because most of the time the mind limits, and these are how epic stories are built, it is never about one person, it is about all those who live and die in the space that you create and this is where the modern formulaic films go wrong.

Testimony to this is one scene which can also be called “the moment of realisation” , the ground is covered by all those who have shaped the hero’s life, direct and indirect, friend and foe.

While the effect of visuals has considerably increased since the times of Paathala Bhairavi, Mandirikumari and Uttama Puthiran, the excitement in telling these stories has been thankfully retained, which I think is the next greatest triumph of Baahubali (the first being the director’s bold imagination). 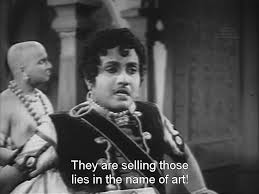 Palaces made of sandstone or software are nothing without the people, here Mahismathi which resembles Minas Tirith from The Lord of the Rings is populated by a league of able actors  who mouth refreshingly well written lines.

“The empty throne of Mahismati resembles a widow’s forehead” a minor character says, enough to make me sit up, the fact really was that I was wide eyed straight from the beginning, even the initial dragging set up seems justified for what is to follow.

Patience in actors like Satyaraj is truly rewarding, one of the finest Indian actors alive, catching your eye even when bowing down to someone in deference; but the film truly belongs to Ramyakrishnan, the God Mother who breast feeds both the scions of her clan, it is said that Romulus and Remus; the founders of the Roman empire were nourished by the same wild wolf and that comparison here only seems right. A performance to savour.

Baahubali is in no means a perfect film, making a film this scale is in a sense like building an empire, but is a start, a beginning as the title loudly says. Post Gladiator, there was an active public interest in the Roman classics and the sword and sandal genre itself, if only Baahubali could do the same; then we could have a cinematic age of empires ahead of us.

One reply on “THE AGE OF EMPIRES”