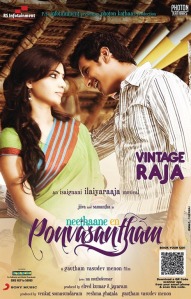 There are some non-communicable songs, ok not some but many; it is because of these songs that many people in the song suggesting business have shut shop and gone to the comfort of their secret playlists. No one can make anyone exactly experience what one experienced, but there also some songs which go into your head from the mouth of another.

“Kaatrai Konjam” from Gautham Vasudev Menon’s Neethane En Pon Vasantham (You are my golden spring!!!) never registered in my head at first, but was forced to unconsciously memorize the lyrics from a friend who somehow managed to pass it on.

As with the purpose of writing this ‘series’, the song is placed at an important point in the film, the lovers have split for some reason and have gone their own ways, they aren’t the giggling collegians now but in their own way mature individuals, this song is the junction where the separated lovers are going to meet. Something like a ‘what you learnt in this chapter’ type segment from a textbook.

What I know of love, I know from movies; which is not much but I am able to understand the insecurities that the hero faces, the song can be divided into a long drawn rehearsal of what he is going to say when he is going to see her.

“I had asked the wind to make garlands (for you),

Weave a mattress of clouds, so I can think (of you)”

It is not new for the lovers to steal excessively from nature, but then he realizes that she might be angry after all; probably the engineer in him sprinkled some practicality into him. Maybe she wants to know why he ignored him and not want him to stop the world.

Going a little on the back foot, our man provides an interesting statistic as a reason

“Many out of a 100 lovers speak face to face, but the divine (us) speak through the hearts and that alone will remain”

Then he opens out truly to how even with the distance not withstanding all he thought was her and pulls a hook to bring her into his future. They must make up for lost time.

The third stanza is perhaps the most shocking, from butterflies in his stomach prior to their meeting, his tongue suddenly is split and the song ends with snake like accusations as to how he has lost himself in the search for her (and in turn himself)

Whatever be my views on the film, this song successfully summarizes the trials of the protagonist in the film, this is not some ‘introduced’ song completely out of context, the song in effect is the scale model of relentless indecisive love.

And they say there is no use for song in films.