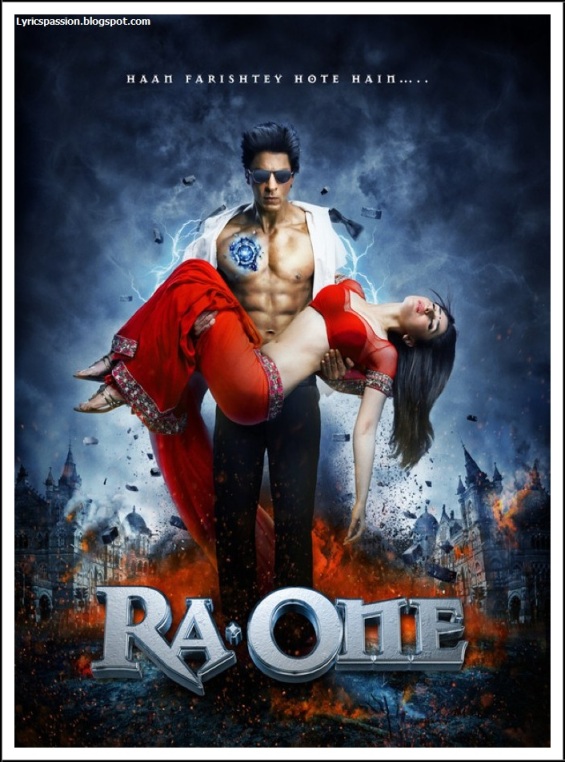 I would wish to start abruptly, just that i am undecided on how much should a movie be promoted. I could have written a paragraph, but i will choose not to. The promotions can in no way affect your product, the thing it can do is bring people to the theatres. The working title of this blog was :Kind HARTS and INTERNETS.
just in case you wanted to know.

The increase in  gimmicks as purists call it may  be due to the rise of one Mr.Salman Khan. Like the Khan himself, we are also clueless how he manages to break industry records with films like Ready and Body Guard.

Coming to our Khan, i.e. the Khan in this film has not had a release since My Name is Khan and it might help to remember that the Salman Blitzkrieg began immediately after that and I am right in thinking that I was not the only one who was irritated by the constant promotions of Ra.ONE. I actually thought it would be quite a bad film and went without much expectation.

Ra.ONE (following the tradition of Goldfinger, Octopussy by naming the film after its antagonist) begins in contemporary London.( like most Hindi films)

Prateik Subramanium, the only son of Tamil game developer Shekar Subramanium is quite ashamed of the uncool-ness of his ‘Appa’ (pause), here I would like to take some time on the portrayal of South Indians up North; although we have stood up together for the same national anthem all these years Subramaniums and Ramamurthys are not looked upon greatly and they have a certain tendency to think that everyone below Hyderabad are idly sambar consuming Brahmins, so when the main character is named Subramanium there is not much reason to celebrate but only an excuse to loop in more idly sambar jokes(‘Now it is time for a South Indian Coffee break, that means we resume work only tomorrow’ says Shekar).

But the laudable thing here is a major Hindi film with a Tamil protagonist; we must also notice that none of our (tamil) films have heroes named Ajay Rathore or Rahul Singhania, the last time I noticed a North Indian name here was Yousuf Khan who was Vijaykanth nemesis in one of his many trips to save India (‘from Kashmir to Kanyakumari’that itself seems like a good title for a Captain movie).

So Shekar wants to create an impression on his son and assigns to himself and his sinking company (Baron Games?)to develop Ra.ONE(clever wording there, SRK) an indestructible villain, which he hopes will make him closer to his bad-ass son. Sonia his wife, looks pretty and sits at dining table conversations where Shekar quotes from V.Shantaram, it is obvious that she loves him and my reasoning is confirmed when they discuss condoms.

Where there is a villain, a hero is not far behind. G.ONE created is created as an exact opposite to Ra.ONE . He may not have the might of Ra.ONE but he does have a good HART, the battle between the good and the bad, makes the rest of the movie.

The concept of a Super-hero in India is not entirely local; we have always lived-off the fantasies of creators at the DC and Marvel offices and have often been awed at their films. It is only understandable for SRK wanting to play super-hero in a land where heroes are worshipped as Gods and thanked for his restraint as to not playing God in the same. SRK does well, both as the man who could never park a car and as the guardian angel from the gaming world made of blue cubes.

The film is visually stunning (I saw it in 3D) and I can safely say that graphics and special effects are put to good use, not the trashy ‘Dangerous Dave’ types which are visually affecting and embarrassing usually seen. A lot of work has been done to provide a quality super-hero movie.

Ra.ONE may not be a (to use an often used phrase) watershed in Indian Cinema, its inspirations are clear for us to see (Terminator 2, Iron Man and in its own way Endhiran) and uses many ploys of already seen blockbusters are understandable and forgiven assuming they were taken as points of reference, Ra.ONE sets out to do what it was made for; in spite of the hype and SRK’s insecurities. Ra.ONE is an honest film with proper casting and already popular music. The voice of Akon suspiciously fits the virtual creation it dubs for, and already the public are hailing with having a better pronunciation of the Rashtriya Bhaasha than Katrina Kaif.

Then there is Kareena Kapoor in a wafer thin red saree, there is something mysteriously good about it. Must be the color.